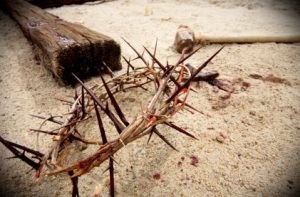 “The crucifixion must always remain enough of a scandalous enigma that it invites us to take a second and third look.”
Easter is approaching, but between us and the pastel colors of Easter lies a ghastly and bloodstained Good Friday. Don’t rush past it. In your haste to get to the garden of the empty tomb, don’t whistle past the gruesomeness of Golgotha. The resurrection is made as cheap as the fake grass in an Easter basket if we don’t linger long and hard over the catastrophe of Calvary. The cross is the epicenter of Christianity. And it is the cross that is the peculiar scandal of Christianity. As the Apostle Paul said,
“We preach Christ crucified, a scandal to Jews and foolishness to Gentiles.” –1 Corinthians 1:23
There is nothing particularly unique about a religion that worships a resurrected god — the ancient world was awash with such religions. But Christianity is the only religion to have as its central focus the suffering and degradation of its God! Easter alone does not make Christianity unique. It’s with Good Friday and Easter together that we find the uniqueness of Christianity.

But how does the Son of God end up wearing a crown of thorns and nailed to a tree? In the earlier parts of the Gospels we see Jesus healing the sick, feeding the hungry, raising the dead, and forgiving sinners. How do these beautiful miracles in Galilee lead to the ugly brutality of Good Friday? The failure to adequately address this question is the failing of most Jesus films. These movies offer little to explain how the preacher of the Sermon on the Mount ends up condemned by the Sanhedrin and executed by the Roman Empire. But the answer is right there in the Gospels.
“Now after John was arrested, Jesus came into Galilee, proclaiming the gospel of God, and saying, ‘The time is fulfilled, and the kingdom of God is at hand; repent and believe in the good news.’” –Mark 1:14, 15
Jesus was not preaching his sermons and working his miracles as “random acts of kindness” but as announcements and enactments of the arrival of the kingdom of God. By the kingdom of God, we mean the government of God, the politics of God, the alternative arrangement of the world that comes from God. In his practice of radical hospitality, Jesus was announcing the arrival of a new way of arranging human society. Jesus was proclaiming to the principalities and powers (the very rich, the very powerful, the very religious, the institutions they represent, and the malevolent spirits that energize it all) that their time was up because the alternative from heaven was now within reach.
Jesus called upon all who heard him to rethink everything (repent) and believe that a radical rearrangement of the world was good news. This is why Jesus emphasized in the beatitudes how fortunate are the poor, the suffering, the meek, and those aching for justice, because they are the people most likely to embrace the kingdom of God as good news. But…
The empire always strikes back.
The principalities and powers had a vested interest in keeping the world as it had always been arranged — an arrangement that benefits the elite. So Caiaphas (the very religious), Herod (the very rich), and Pilate (the very powerful) colluded together to execute this Galilean disrupter who threatened their preferred social order. A mere five days after arriving in Jerusalem, Jesus is betrayed, arrested, tried, condemned, spit upon, beaten, scourged, and crucified. This is Jesus bearing the sin of the world. As Fleming Rutledge says,
“When we say that Jesus Christ took upon himself the sin of the world, it means quite specifically that he suffered the shame and degradation that human beings have inflicted on one another and that he above all others had done nothing to merit.” –The Crucifixion, p. 84
The cross is not something we can reduce to a tidy theory so that we can brush our hands off and say, “That’s that. All done. All figured out.” No. That is too much like Pontius Pilate washing his hands and falsely claiming to be innocent. The crucifixion must always remain enough of a scandalous enigma that it invites us to take a second and third look. So here is one way (among many) of talking about the cross…
At the cross, the sin of the world coalesced into a singularity where it was both borne and forgiven by God in Christ. The structures of sin (“the sin of the world”) that entangles and implicates all of us reached its hideous apex in the crucifixion of the Son of God. At Golgotha, the sin of the world gathered in a Good Friday singularity where it was absorbed and forgiven and thus dispelled.
When Paul speaks of Christ being made sin, all we have to do is to look at a crucifix to understand this is true. What could be a greater sin? What could be a greater crime? No crime can be greater than the crime of deicide — the murder of God. And that’s what we see when we look upon the cross; we see the sin of the world coalesced into a single event — the killing of the Innocent One.
On Good Friday all the disparate sins of the world amalgamate into the sin of the world. Whether flowing forward in time or backward in time, every human sin, every act of selfishness, every debasing degradation coalesces in an awful singularity at the cross. What is the sin of the world? It is Jesus nailed to a tree. This is why on one level the crucifixion will always remain ugly — it is the image of all sin coalesced into a single event.
But that’s not all the cross is. The cross is also beautiful. The cross is both the awful crescendo of human sin and the sublime apex of divine grace. The cross is beautiful because it is the place where sin as a singularity is absorbed, forgiven, and transformed into reconciliation.
“Father, forgive them, for they know not what they do.” –Luke 23:34
“God was in Christ reconciling the world to himself, no longer counting people’s sins against them.” –2 Corinthians 5:19
This is the beauty that saves the world. And it’s the light of Easter shining upon the cross that reveals this beauty. But if we rush past Good Friday we miss it all.
As we approach Good Friday let us slow down and behold the Lamb of God who takes away the sin of the world.
Written by Brian Zahnd