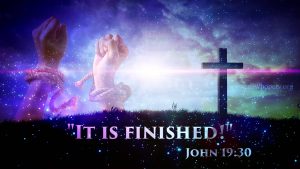 It is Friday, April 3, A.D. 33. It is the darkest day in human history, though most humans have no clue of this. In Rome, Tiberius attends to the demanding business of the empire. Throughout the inhabited world, babies are born, people eat and drink, marry and are given in marriage, barter in marketplaces, sail merchant ships, and fight battles. Children play, old women gossip, young men lust, and people die.
But today, one death, one brutal, gruesome death, the worst and best of all human deaths, will leave upon the canvas of human history the darkest brushstroke. In Jerusalem, God the Son, the Creator of all that is (John 1:3), will be executed.

The Jewish day dawns with night, and never has it been more fitting, since today the hour has come and the power of darkness (Luke 22:53). Jesus is in Gethsemane, where he has prayed with loud cries and tears, being heard by his Father (Hebrews 5:7), whose will  be done. Jesus hears noises and looks up. Torches and hushed voices signal the arrest party’s arrival.

Jesus wakes his sleepy friends, who are jarred alert at the sight of their brother, Judas, betraying his Rabbi with a kiss. Soldiers and servants encircle Jesus. Peter, flushed with anger, pulls out his sword and lunges at those nearest Jesus. Malchus flinches, but not enough. Blinding pain and blood surge where his ear had been. Voices speak, but Malchus only hears the screaming wound, which he’s grabbed with both hands. He feels a hand touch his hands and the pain vanishes. Under his hands is an ear. Stunned, he looks at Jesus, already being led away. Disciples are scattering. Malchus looks down at his bloody hands.

Jesus is led brusquely into the house of Annas, a former high priest, who questions him about his teaching. Jesus knows this informal interrogation is meant to catch him disoriented and unguarded. He is neither and gives this manipulative leader nothing. Rather, he refers Annas to his hearers and is struck with irony by a Jewish officer for showing disrespect. Frustrated, Annas sends Jesus on to his son-in-law Caiaphas, the current high priest.

At Caiaphas’s house, the trial gets underway quickly. Morning will come fast. The council needs a damning verdict by daybreak. The examination proceeds as bleary-eyed Sanhedrin members continue to file in.
The trial has been assembled hastily and witnesses haven’t been screened well. Testimonies don’t line up. Council members look disconcerted. Jesus is silent as a lamb. Irritated and impatient, Caiaphas cuts to the quick, “I adjure you by the living God, tell us if you are the Christ, the Son of God” (Matthew 26:63).
The hour has come. Charged in the name of his Father to answer, Jesus speaks the words that seal the doom which he had come to endure (John 12:27): “You have said so. But I tell you, from now on you will see the Son of Man seated at the right hand of Power and coming on the clouds of heaven” (Matthew 26:64).
In a moment of lawbreaking (Leviticus 10:6; 21:10), politically religious theater, Caiaphas tears his robes in feigned outrage and thinly concealed relief over Jesus’s blasphemy. He declares the trial’s end with, “What further testimony do we need? We have heard it ourselves from his own lips” (Luke 22:71).
As the sun breaks over Jerusalem’s eastern ridge, Judas swings from his own belt, Peter writes in the grief of his failure, and Jesus’s face is streaked with dried blood and saliva from the pre-dawn sport of the temple police. The council’s verdict: guilty of blasphemy. Their sentence: death. But it’s a sentence they cannot carry out. Rome refuses to delegate capital punishment.

Pilate’s mood, already sour over the Sanhedrin’s sudden insistent intrusion so early in the morning, worsens as he grasps the situation. They want him to execute a Galilean “prophet.” His seasoned instincts tell him something isn’t right. He questions Jesus and then tells the council, “I find no guilt in this man” (Luke 23:4).

A game of political chess ensues between Pilate and the Sanhedrin, neither realizing that they are pawns, not kings.
Pilate makes a move. As a Galilean, Jesus falls under Herod Antipas’s jurisdiction. Let Herod judge. Herod initially receives Jesus happily, hoping to see a miracle. But Jesus refuses to entertain or even respond. Antipas, disappointed, blocks the move by returning Jesus to Pilate.
Pilate makes another move. He offers to release Jesus as this year’s annual Passover pardoned prisoner. The council blocks the move. “Not this man, but Barabbas!” they cry (John 18:40). Pilate is astounded. The Sanhedrin prefers a thief and murderer to this peasant prophet?
Pilate tries another move. He has Jesus severely flogged and humiliated, hoping to curb the council’s bloodthirst. Again the move is blocked when the council insists that Jesus must be crucified because “he has made himself the Son of God” (John 19:7). Check. Pilate’s fear grows. Jesus’s divine claim could threaten Rome. Worse, it could be true. Roman deities supposedly could take on human form. His further questioning of Jesus unnerves him.
One last move. Pilate tries to persuade the Sanhedrin to release Jesus. One last block and trap. “If you release this man, you are not Caesar’s friend. Everyone who makes himself a king opposes Caesar” (John 19:12). The council has Pilate where they want him: cornered. Checkmate.
And the triune God has the council, Pilate, and Satan where he wants them. They would have no authority over the Son at all unless it had been given them from above (John 19:11). Fallen Jews, Gentiles, and spiritual powers unwittingly collaborate in executing the only innocent death that could possibly grant the guilty life. Checkmate.

Morning wanes as Jesus stumbles out of the Praetorium, horribly beaten and bleeding profusely. The Roman soldiers had been brutal in their creative cruelty. Thorns have ripped Jesus’s scalp and his back is one grotesque, oozing wound. Golgotha is barely a third of a mile through the Garden Gate, but Jesus has no strength to manage the forty-pound crossbar. Simon of Cyrene is drafted from the crowd.

Twenty-five minutes later, Jesus is hanging in sheer agony on one of the cruellest instruments of torture ever devised. Nails have been driven through his wrists (which we only know about because of the doubt Thomas will express in a couple days, John 20:25). A sign above Jesus declares in Greek, Latin, and Aramaic who he is: the King of the Jews.
The King is flanked on either side by thieves, and around him are gawkers and mockers. “Let him save himself if he is the Christ of God, his Chosen One!” some yell (Luke 23:35). One dying thief even joins in the derision. They do not understand that if the King saves himself, their only hope for salvation is lost. Jesus asks his Father to forgive them. The other crucified thief sees a Messiah in the mutilated man beside him, and he asks the Messiah to remember him. Jesus’s prayer is beginning to be answered. Hundreds of millions will follow.
It is mid-afternoon now and the eerie darkness that has fallen has everyone on edge. But for Jesus, the darkness is a horror he has never known. This, more than the nails and thorns and lashings, is what made him sweat blood in the garden. The Father’s wrath is hitting him in full force. He is in that moment no longer the Blessed, but the Cursed (Galatians 3:13). He has become sin (2 Corinthians 5:21). In terrifying isolation, cut off from his Father and all humans, he screams, “Eli, Eli, lema sabachthani?” Aramaic for “My God, my God, why have you forsaken me?” (Matthew 27:46; Psalm 22:1). No greater love (John 15:13), humility (Philippians 2:8), or obedience (Hebrews 5:8) has ever or will ever be displayed.
Shortly after three o’clock in the afternoon, Jesus whispers hoarsely for a drink. In love, he has drained the cup of his Father’s wrath to the dregs. He has borne our full curse. There is no debt left to pay and he has nothing left to give. The wine moistens his mouth just enough to say one final word, “It is finished” (John 19:30). And God the Son dies.
It is the worst and best of all human deaths. For on this tree he bears our sins in his body (1 Peter 2:24), “the righteous for the unrighteous, that he might bring us to God” (1 Peter 3:18). And now it is finished.

A bright irony on this darkest of days is that the men who step forward to claim the corpse of the Christ for burial are not family members or disciples. They are members of the Sanhedrin: Joseph of Arimathea and Nicodemus. It is one more unexpected thread of grace woven into this tapestry of redemption. They quickly wrap Jesus’s body in a sheet and lay it in a nearby tomb. Evening is falling and they don’t have time to fully dress it with spices.

Mary Magdalene and Mary the mother of Joses accompany them, careful to note the tomb’s location. They plan to return with more spices after the Sabbath, on the first day of the week, to make sure that it is finished.
Written by John Bloom