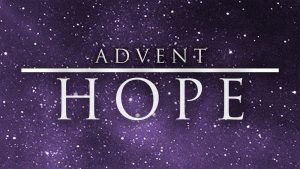 The royal line of David is like a tree that has been cut down; but just as new branches sprout from a stump, so a new king will arise from among David’s descendants. The spirit of the Lord will give him wisdom and the knowledge and skill to rule his people. He will know the Lord’s will and honour him and find pleasure in obeying him. He will not judge by appearance or hearsay; he will judge the poor fairly and defend the rights of the helpless. At his command, the people will be punished, and evil persons will die. He will rule his people with justice and integrity. [Isaiah 11:1-5 (GNT)]

For many, Advent simply means a cute cardboard calendar with 25 windows to open and, if you happen to have one of the fancy German ones, a small piece of chocolate to eat every day until Christmas. For others, it’s the time of year to put the elf out on the shelf, remind the kids that Santa’s watching, decorate the house or get started on the holiday baking. For many, however, Advent signifies the start of the Christian church’s calendar year. At church Sunday, we lit the first candle in the Advent wreath. The wreath itself is a circular garland of evergreen; its greens represent eternal life and its circular shape, God’s unending love. In the darkness of our lives and the world today, that first Advent candle represents hope. Often called the prophecy candle, it reminds us that Jesus’ coming was prophesied hundreds of years before His birth. It represents mankind’s past hope for the coming of the promised Messiah, our present hope because of Jesus’ presence in our lives, and our hope for the future with His promised return.

According to the Greek myth, Pandora opened a box that released all of the evils of humanity; only hope was left once she’d closed it again. Of course, it wasn’t Pandora—it was Adam and Eve who brought sin into the world with their disobedience. Hope, however, didn’t remain in a box and the Old Testament prophets reassured the world of that hope with their promise of a Messiah, the anointed one, the King of Kings. Their prophecies came true that first Christmas in Bethlehem.

How many times this past week did you hope?  We all hope: the family will arrive home safely, the turkey will be done on time, he’ll pass the test, we don’t get a ticket, the party will go without a hitch, she’ll get the job, he’ll recover, our team will win or that Uncle Joe won’t get drunk at the family dinner. Without hope, life loses its meaning and we couldn’t survive. The worst words to hear are, “There’s no hope!” Many of us, however, have heard those very words in doctor’s offices or hospital corridors. Yet, even then, there is hope—the hope that came into the world with the birth of Jesus. God gave us the gift of hope in a baby, wrapped in swaddling clothes, and sleeping in a manger. He gave us hope with His forgiveness of sins, our salvation, and His promise of peace. He gave us hope with the resurrection of the dead, the communion of saints, the redemption of creation, the Holy Spirit, the return of Christ, and the life of the world to come.

Thank you, Heavenly Father, for the gift of hope.

A prison cell, in which one waits, hopes…and is completely dependent on the fact that the door of freedom has to be opened from the outside, is not a bad picture of Advent. [Dietrich Bonhoeffer, 1943]

He will settle disputes among great nations. They will hammer their swords into ploughs and their spears into pruning knives. Nations will never again go to war, never prepare for battle again. Now, descendants of Jacob, let us walk in the light which the Lord gives us! [Isaiah 2:4-5 (GNT)]

From the blog JSJ Devotions