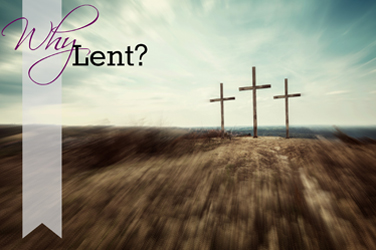 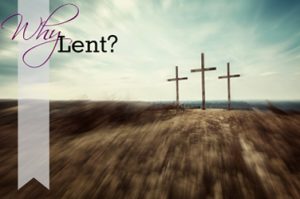 Apollo 13 astronaut Jim Lovell used to tell a story about a mission he flew in his F2H Banshee off the coast of Japan in 1950. He had missed the rendezvous point when his instruments mistakenly picked up a signal leading him away from his aircraft carrier. Lovell felt hopelessly lost as he flew circles in the dark over the stormy Sea of Japan. As he tried to use his map light, suddenly all of the electronics in the cockpit shorted out and everything went black. A bad omen he thought, until he began looking down at the water below. With the absence of light in the cockpit his eyes began to adjust to the dark, making it possible to see the faint trail of phosphorescent algae churned up by the propellers of the carrier he was looking for. He followed the trail and landed safely. Were it not for the failed light and the resulting darkness, Lovell might have been forced to ditch his plane. The darkness saved him.

This story is a great metaphor for the observance of Lent. Lent is officially the forty days between Ash Wednesday and Good Friday excepting Sundays. It is meant to be a season in which Christians voluntarily short out the cockpit lights in our daily routines through Lenten Fasts, hoping that in the self-induced darkness we might actually be able to see our way forward a little better. And if ever a people needed to turn out the lights and sit in the darkness for awhile, it is the typical American Evangelical Christian.

Don’t get me wrong — these are my people — but we Evangelicals have a few issues not the least of which is a pernicious condition called satiation. Satiation is the absolute satisfaction of every human need to the point of excess. If you don’t understand the term, grab a bag of Snickers bite-sized candies and start eating until you can’t eat anymore. That’s satiation. Now imagine that sensation drawn across every aspect of life. Every opportunity, every privilege, every advantage is ours. Yet, instead of leveraging that toward the common good, toward the least of these, we are trained steer it toward ourselves… or at least toward a new a flat screen TV — not the 32 inch, but the 55 inch; not the plasma but the LCD; not the HD alone but the one with 4K — satiation.

Prolonged satiation does some lasting damage to a person. Satiation has effectively transformed most Evangelicals into what I call the “serial-eventist.” These are people whose lives have become one long contiguous pursuit of the ultimate experience. From a small group or friendship, to a political election, to a new season of whatever we’re currently binging on Netflix. We serially flit from one event to another, searching for the next high to bring the sensation of meaning to our lives. We choose churches where we can be “fed.” We like church services we “get a lot out of.” It’s really the exact opposite trajectory of everything Jesus ever taught. For many Evangelical Christians their faith subsists on one event after another.

When “becoming a Christian” is defined as an event and not a new way of being human, we have betrayed the gospel. It’s no wonder the gospel has ceased to make moral claims upon our lives. It’s no wonder we’ve lost our moral imagination.

The sad result of satiation is that we lose any sense of mystery, wonder, and awe. Satiation dulls the imagination and healthy spirituality loses out to the pursuit of the ultimate experience. Lent can be the antidote. The Lenten pilgrim can be unplugged from the Matrix of satiation, and they can actually see the way forward while everyone else is flying in circles over the Sea of Japan. Lent is our way of killing the lights that hide the way home.

Annie Dillard once wrote “God asks nothing, and demands nothing, like the stars. It is a life with God which demands these things.” She was talking about disciplines such as Lent and she was right. “You do not have to do these things,” she wrote, “unless you want to know God. They work on you not on him … you do not have to sit outside in the dark. If, however, you want to look at the stars, you will find darkness is necessary. But the stars neither require nor demand it.” Come on Evangelicals — give something up for Lent! Make it something tough. Challenge yourself a little bit. For forty days, give up your satiation, turn out the lights, sit in the darkness, gaze up at the night sky, and let the North Star lead the way home.