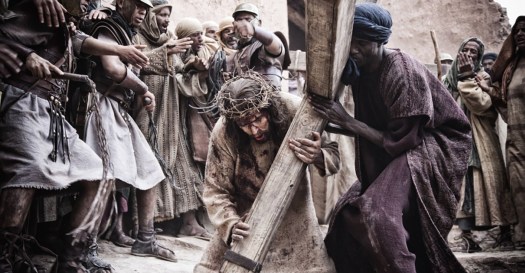 Carrying the Cross with Simon of Cyrene 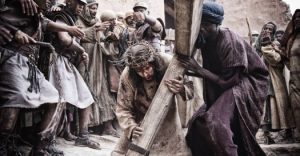 “He summoned the crowd with his disciples and said to them, ‘Whoever wishes to come after me must deny himself, take up his cross, and follow me.’” – Mk 8:34

“They pressed into service a passer-by, Simon, a Cyrenian, who was coming in from the country, the father of Alexander and Rufus, to carry his cross.” – Mk 15:21

“Carrying our cross” is a quite familiar concept to Christians.  We tend to associate this notion with physical ailments or challenges, difficulties in prayer, mental illness, emotional distress, or any of a number of unwelcome events that inevitably occur in life.  Unwelcome as they are, if they cannot be eliminated or mitigated, they must be endured.  However, Jesus tells us in all three synoptic Gospels that carrying the cross is the calling of all authentic followers of his, a cost of true discipleship (see Mt 16:24, Mk 8:34, and Lk 9:23, 14:27).  How we deal with our crosses, then, makes all the difference for us and for many persons with whom we associate.

Of course, the best person from whom to learn how to handle the crosses that come our way is Jesus himself.  But, as fallen human beings, it is particularly instructive to consider the only man like us (in all things, including sin) who actually (not metaphorically) carried the cross of Jesus aside from our Lord himself, namely Simon of Cyrene.

Cyrene (pronounced sai-REE-nee) is located on the continent of Africa in what is now Libya.  Nearly 900 miles separate Cyrene and Jerusalem, a journey that would have taken several weeks in the first century.  Simon was very likely a Jew coming to Jerusalem for Passover.  That he comes from Cyrene is unsurprising because we know from 1 Maccabees 15:23 that there was a Jewish community in Cyrene for at least 300 years prior to the events of Holy Week; we also know that Cyrenian Jews had their own synagogue in Jerusalem per Acts 6:9.  Earlier in Acts we are told that there were Cyrenians in the crowd who heard Peter speaking on the day of Pentecost (2:10).  Later, in Acts (11:20), we hear of Cyrenians preaching to Greek Gentiles.  Another Cyrenian, Lucius, is mentioned as being in the church in Antioch (Acts 13:1).  Certainly, Cyrene was an active center of evangelization in the early decades of Christianity.

Simon of Cyrene in the Gospels

Simon of Cyrene is mentioned only three times in the New Testament: once each in Matthew (27:32), Mark (15:21 – quoted at the beginning of this article), and Luke (23:26), and all in relation to the episode on the way to Calvary.  We are told that this “passer-by…was coming in from the country” (Mk 15:21) when the Romans “took hold” (Lk 23:26) of him and “pressed {him} into service” (Mk 15:21 and Mt 27:32) to carry Jesus’ cross.  We know from John’s Gospel that Jesus initially bore his own cross (Jn 19:17)h but it is commonly held that the soldiers, because they feared that Jesus would not be able to make it to the place of execution without assistance due to the beating he had already endured, looked for help in the crowd. Conscripting Simon, they led him to the Nazarene and “after laying the cross on him, they made him carry it behind Jesus” (Lk 23:26).

From what we know of Roman crucifixions, it is most likely that only the transverse beam was carried by Jesus, and then Simon; the vertical beam was planted at the crucifixion site.  Contrary to the traditional form of the Stations of the Cross, there is no indication in the Bible that Jesus again touched the cross until he was nailed to it on Calvary.  (The Pope Paul VI approved scriptural form of the stations, celebrated publicly by Pope John Paul II, adheres only to events explicitly found in the Gospels.)

The Impact of Jesus on Simon

Simon may well not have heard of Jesus prior to his visit.  As one who had just arrived in Jerusalem from the country, it seems unlikely that he witnessed Jesus’ trial, or had been part of the crowd associated with these events (after all, as mentioned above, he is described as a “passer-by”).  Yet, after this lengthy trip, he was being forced to help this Jesus of Nazareth, a condemned man.

It is not difficult to imagine Simon’s initial reactions to being conscripted into this service:

Although we hear nothing of Simon in Scripture after this event, it is worth considering what Simon might have made of Jesus per his direct involvement with him, as well as with regard to subsequent news regarding Jesus:

Did he witness the execution of Jesus, or did he make haste to get away from there?  What must his companions (if any) and others have said afterwards?  Was he still in town on Sunday?  If so, did he hear of the resurrection while he was in Jerusalem?  Might he have been one of those Cyrenians who heard Peter on Pentecost?  Assuming he did not stay long enough in Jerusalem to be in the crowd for Peter’s speech, what would Simon have made of the reports that he would have undoubtedly heard from friends and acquaintances upon their return to Cyrene?  Then, what was his reaction to all of these incredible happenings in light of his intimate involvement in the march to Golgotha?  Was he eager to tell his story, or did he keep it quiet?  Did his attitude toward sharing his experience change over time?

Even though Simon is not referred to again in Scripture, we know he leaves a family legacy.  Note in the second Scripture passage presented at the beginning of this article that two of Simon’s children, Alexander and Rufus, are mentioned by the evangelist, Mark.  Why would Mark do this?  In all likelihood, Mark includes those names in his Gospel because they would be familiar to the Gentile community in Rome, for whom Mark was writing (in fact, Paul, in his letter to the Romans, greets a Rufus and his mother, 16:13).  Simon’s boys were likely quite young at the time of Jesus’ death, if they were even born yet; this is so because, since the Roman soldiers could pick out just about anyone from what must have been a significant mass of persons, Simon was likely a younger, robust man who would not falter in taking the burden off of Jesus’ shoulders.  It seems that the impact of this event was impressed so strongly by Simon upon his sons (and how could it not have a lasting effect in light of the resurrection?) that they became prominent Christians in the heart of the Roman Empire.

Let us consider how Simon’s possible initial reactions, described in the previous section, can be ours as well when an unexpected cross comes our way:

Simon’s experience and ours may be ostensibly vastly different but the reactions are often the same.

This leads us to a reflection on how we handle carrying our inevitable crosses.  The cross was unexpected for Simon; the cross is often unexpected for us, as well.  He could not refuse the cross and, ultimately, neither can we.  While we will never know for sure the answers to the questions we wondered of Simon in the aftermath of his encounter with Jesus, we can use similar queries to examine ourselves:

As alluded to above, unlike Simon—whose knowledge of Jesus at the time he met him on the way to his death, was a passing knowledge at best—we do not have the excuse of not knowing Jesus.  Whatever our initial reactions to a significant setback, or tragic event, we can be sure that we have the Lord to fall back on—Jesus gave us his Word.  Crosses will come our way—whether they are pressed upon us, passively accepted, or actively welcomed—but, in order to reach our heavenly goal, God’s grace is needed to help us.  This grace is not forced on us; we must be open to it.  Are we ready and willing to embrace suffering, for the rest of this earthly journey, until the death comes that we all must experience?

Notice again what we are told about Simon of Cyrene in Luke: “after laying the cross on him, they made him carry it behind Jesus” (23:26; emphasis added).  Intellectually, it is quite easy to subscribe to all that has been said to this point regarding what should be our disposition in times of trial.  If we are not experiencing any particularly severe problems currently, we are probably quite willing to say we will “offer it up” when we are faced with the next challenge.  But when we actually must grapple with a certain physical, spiritual, psychological, or emotional battle, happily uniting our sufferings with Christ is not necessarily what we would consider an easy or desirable path to follow.  Most likely, we wish (and hopefully pray) that the burden will be removed.  And there is nothing wrong with asking God for relief.  If the Lord alleviates our pain, we should be quick to acknowledge it, and give thanks to him for the healing.  If God does not take away the hurt, though, he may be using it to help us grow in faith or hope or love (or maybe he wants us to grow in all three of these virtues).  It may be his way of breaking down the barriers to have us completely surrender to his will in our lives.

In the case of Simon, Jesus used his own way of the cross to draw Simon to himself, an encounter Simon would not have had otherwise, and possibly an encounter with Christianity in which he would have never engaged.  Simon may never have come to pay attention to the Gospel message had he not crossed paths with Jesus.  As a result, Simon’s sons may not have become active in the Christian community (who knows how many lives they changed?).

We can be sure that Jesus was grateful to Simon for providing some relief during the Passion, but also for helping him reach his goal of redeeming humanity (see Jn 12:27 and Acts 2:23) by his suffering and death.  As difficult as it is to deal with our own challenges, we are also called to relieve others in their difficulties, being Christ for them—which may end up being their first real and substantial encounter with the Gospel message.  Our example and our witness are often the best tools for evangelization.

Jesus pulled in Simon, and then led the way.  This is the same path given to persons of every age since Christ and, just the same, the path given to us today.  By his suffering and ours, Jesus draws us to himself, calling us to follow his Via Dolorosa to death.  But it does not end there.  Jesus conquered death.  “Dying he destroyed our death, rising he restored our life,” as we read in the Catechism of the Catholic Church (#1067).  By faithfully following Christ, we have the promise of resurrection in him.  We carry the transverse beam—the horizontal beam of this earthly life—and Jesus raises us up on the vertical beam to eternal life.  We are called to embrace the cross joyfully, when invited to carry it, acknowledging the redemptive value that comes from it, as we walk up to Calvary with Jesus.  The reward is everlasting.