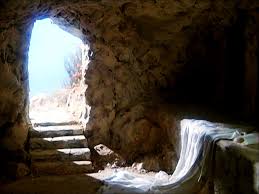 REFLECTIONS ON THE RESURRECTION

I’ts that beautiful time of year again when Christians around the world celebrate the Resurrection of Jesus Christ.  Churches will stage reenactments of the Last Supper or the crucifixion, or put on sunrise services celebrating the Resurrection. It is a time for reflecting upon Jesus’ Passion, for singing songs of triumph, a time of great rejoicing and praising our Lord and Savior who has risen from the dead.

The Resurrection of Jesus Christ is the single most important event in human history.  It is the hinge upon which the Old and New Testaments turn––that which the prophets foresaw, and that which we look back upon. It is that salient event alone that separates Christianity from every other world religion, for Christianity alone boasts a risen Lord, and not a dead prophet or teacher.

It is the cornerstone upon which every Christian holiday is founded.

Without the Resurrection the Christmas Story would be little more than a sentimental nod to a Jewish couple who gave birth to a baby boy, of dubious parentage, on a cold Bethlehem night.  Courier and Ives would not have made a single Christmas card.  Not a single Christmas hymn would have be written, nor gift given. Handel’s Messiah would have been an ode to a hopeless dream.

Without the Resurrection every religious holiday would be irrelevant.  Church services would be unneeded, even silly.  Bible schools, evangelistic crusades, and daily devotions would be a waste of time.  Prayer would be a meaningless beating of the air with our tongues.

But of even greater importance, were it not for the resurrection of Jesus Christ we would be lost in our sins.  Paul said:

“If Christ has not been raised, then our preaching is vain, your faith also is vain.  Moreover we are even found to be false witnesses against God that He raised Christ, whom He did not raise, if in fact the dead are not raised.  For if the dead are not raised, not even Christ has been raised; and if Christ has not been raised, your faith is worthless; you are still in your sins.  Then those also who have fallen asleep in Christ have perished.  If we have hoped in Christ in this life only, we are of all men most to be pitied” (1 Corinthians 15:14-19).

Were it not for the resurrection then the verses of Scripture that I just quoted are a lie.  And everything ever written or said about Him is a lie.  The Bible itself is false.  What’s more, Jesus said that He would rise on the third day.  If He didn’t then He was a liar.

But the tomb is empty!

The Roman guards were the liars.  The Pharisees were the liars.  Jesus really did rise from the dead.  He really did appear to Mary Magdalene, to the two disciples on the road to Emmaus, to the apostles behind closed doors, to hundreds of people over a period of forty days, showing irrefutable proofs that He who was once dead was now alive!  And finally, He showed Himself to Saul of Tarsus, who became the Apostle Paul!

Because Jesus rose from the grave the apostles and early followers of Christ went to their deaths in arenas, in obscure villages far from home, apart from the comfort of fellow believers, knowing that their faith was not in vain.  They had witnessed the Resurrection.

The Lord Jesus Christ is alive!

Because Jesus is alive I, too, have a blessed hope that one day I will hear the trump of God, and my body, which has died and decayed, will be clothed with immortality.  I will be raised incorruptible, glorious.  I will be fitted for life in God’s eternal kingdom.  I will see my Savior face to face.  It will all be made clear.  There will be no more tears.  No more death!

I will hear the words I have longed to hear, for forty-three years now, “Well done, good and faithful servant…enter into the joy of your Lord! (Matt 25:23).  There are no sweeter words in heaven or on earth, all because of the Resurrection.

Refrain:
Up from the grave he arose;
with a mighty triumph o’er his foes;
he arose a victor from the dark domain,
and he lives forever, with his saints to reign.
He arose! He arose! Hallelujah! Christ arose!
Christ Arose, by Robert Lowery (1826-1899)