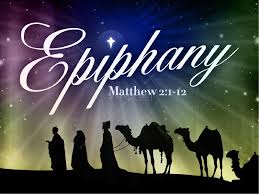 “For we saw his star when it rose and have come to worship him.” —

It’s a dull, grey day and there’s an emptiness around my heart, something I can’t quite name. Where is the child all the fuss was about? Where is Jesus?

I wonder if the Church knew it might be like this when she made January 6 an annual celebration of Christ’s Epiphany – “manifestation.”  Twelve days after Christmas, when our gifts are put away and we’ve all but forgotten that baby in the manger, a star comes out to point our way back to him. You can read about it in Matthew 2:1-12.  From their far-off home “in the East” (Persia?), some Magi (“wise men”) see a new star in the sky. [Which in itself is an indication of God’s love for everyone. There is no “out of sight, out of mind” where God is concerned! No one is too far away for his reach.] These men already follow the stars, and they know that this one heralds a new king of the Jews. Israel wasn’t exactly a world power back then. So there must have been something in their lore to hint at his greatness: something that made it worth packing up and leaving who-knows-what behind to travel to Jerusalem, the royal city and most-likely birthplace of a king.

I imagine the final leg of their journey is full of excited anticipation. But instead, they meet with ignorance and apathy. Herod and the people are “troubled.” They are not ready for this birth. How easy it would have been for the Magi to think they were mistaken. Maybe they were wrong about the star. What kind of king would not be welcomed by the country’s leaders? And yet they don’t give up. They learn of a prophecy that the king is to be born in Bethlehem and they head out of town. And when they do — “lo!” — the star they saw back home, comes out and leads them. They follow to a most unlikely place, a humble house where they find the child with his mother. Rejoicing even before they enter, the Magi fall down before the child and worship. Detail, Adoration of the Magi by Andrea Mantegna, 1495. Public domain.

This could be written about today. So many people are ignorant or apathetic where it comes to Jesus. Thoughts of his presence trouble them. To the world, he’s just a baby in a hovel: a shabby, time-worn vestige of some ancient lore, some old-school and probably misguided belief. Do we, like the townspeople, see that and turn away … or like the Magi, do we keep our eyes fixed on the Star (the Truth, the Good News of the Gospel) and see things by its light?

I want to find the Christ-child. So I take a cue from the Magi and make my way to Jesus’s house — to church. Kneeling before the Blessed Sacrament, I start to pray. Now what? I take another cue from those wise men: Once they are in his presence, “opening their treasures, they offered him gifts, gold and frankincense and myrrh” (Mt 2:11).

Maybe in expecting to receive, I’ve missed the point.  What can I give him? I must “open my treasures” — open myself and all that I have to him — and offer him my best:

In giving these things, I realize I am finding the Christ child.  And (lo and behold!) “Epiphany” — the manifestation, the making present, of the Son of God in the world — is happening through me:

Jesus is made manifest in this world when I give of my treasure.

He is made manifest in this world when I worship and offer him praise.

He is made manifest in this world when I give my life.

May the God who sent a star to guide the Magi, fill us with their “exceeding joy.” And may the Child accompany us as we return to our daily lives, like the Magi did,  “another way”: carrying him with us, inside us in the Eucharist and through his Spirit.

That is a gift far greater than the Wise Men could have ever imagined.